Intervals were calculated using all assays for the given interval and length weighting the assays to create the interval values.  No capping or bottom cuts were used.

WT11-004 was drilled from the same pad as hole WT11-001 which yielded 15.48m of 3.08 g/t Au and 94.75 g/t Ag (See July 19, 2011 News Release).  WT11-004 cut mineralization approximately 60 meters along strike from WT11-001, and Company geologists estimate that true thickness is approximately 65%.  The hole cut mineralization within a gap in the previous drill hole spacing at a depth predicted by the Company’s modeling.  Drilling is continuing at TUG.

“Our TUG drilling to date has confirmed and expanded the existing deposit,” said Michael G. Allen, Vice President of Exploration for West Kirkland.  “We are continuing to explore for extensions of the deposit both along strike and at depth and are impressed with our results so far.”

The TUG property is contiguous with 900 square kilometers (220,000 acres) of mineral rights in the Long Canyon Trend that the Company has optioned through a recent transaction with Rubicon Minerals Corporation (“Rubicon”). The combined Newmont and Rubicon option agreements give West Kirkland a dominant land position within the Long Canyon Trend and will be the focus of the Company’s exploration efforts in Nevada.

WT11-003 was drilled on a target outside the known zone to the east and did not intersected significant values.

The Company has completed an initial prospecting and sampling program in the outcrop ranges across the valley to the north and east of the Long Canyon gold deposit. To the north in the Leach Mountain Project area, previous work by Rubicon identified an approximately 53 square kilometer area of elevated gold in stream sediment sampling that the Company is following up with detailed (75m by 75m grid spacing) soil sampling.  In addition, previously unidentified zones of silicification and alteration have been discovered by West Kirkland geologists.  To the east on the Toano Block, geology and structures similar to the nearby Long Canyon Deposit have been identified as well as historic workings.  These areas are currently also being soil sampled in detail to focus further exploration efforts in this portion of the Company’s Nevada holdings.

Samples of drill core were saw cut, with half the cut core placed in individual sealed bags and half placed back in the original core box for permanent storage.  Drill core samples were delivered directly by West Kirkland personnel to the ALS Chemex prep lab in Winnemucca Nevada.  Prepared pulps were shipped by ALS Chemex to their North Vancouver Lab where gold was determined by fire assay fusion with Inductively Coupled Plasma (ICP) finish.  Gold samples that assayed greater than 1 g/t were re-assayed using gravimetric analytical methods.  Silver samples that assayed greater than 100 g/t were re-assayed using four acid digestion with ICP finish.  ALS Chemex’s North Vancouver Lab is ISO 9001:2008 certified and also is ISO/IEC 17025:2005 accredited by the Standards Council of Canada for the assay methods employed.

Michael G. Allen, Vice President of Exploration for West Kirkland, and a Qualified Person as defined by Canadian National Instrument 43-101, has reviewed the information contained in this news release and has also verified the analytical data for drill core samples disclosed in this release by reviewing the blanks, duplicates and certified reference material that the Company inserted into the sample stream and confirming that they fall within limits as determined by acceptable industry practice.  He is the non-independent qualified person for this new release and has verified the data.

West Kirkland Mining was formed in 2010 to focus on gold exploration along major trends in North America. The Company has consolidated significant mineral rights positions in the Kirkland Lake area of Ontario and within major gold trends of North Eastern Nevada - two of North America’s premier gold jurisdictions. The founders and Board of West Kirkland Mining have successful gold discovery, development and mine operations experience in both Ontario and Nevada over the past 40 years.

For further information, please see the Company’s website at www.wkmining.com or contact us by email at [email protected] or call:

This press release contains forward-looking information within the meaning of Canadian securities laws. Such information includes, without limitation, information regarding proposed exploration activities. Although the Company believes that such information is reasonable, it can give no assurance that such expectations will prove to be correct. Forward-looking information is typically identified by words such as: believe, expect, anticipate, intend, estimate, postulate and similar expressions, or are those, which, by their nature, refer to future events. The Company cautions investors that any forward-looking information provided by the Company is not a guarantee of future results or performance, and that actual results may differ materially from those in forward looking information as a result of various factors, including, but not limited to, the state of the financial markets for the Company’s equity securities, the state of the market for gold or other minerals that may be produced generally, recent market volatility; variations in the nature, quality and quantity of any mineral deposits that may be located, the Company's ability to obtain any necessary permits, consents or authorizations required for its activities, to raise the necessary capital or to be fully able to implement its business strategies and other risks associated with the exploration and development of mineral properties. The reader is referred to the Company's public filings for a more complete discussion of such risk factors and their potential effects which may be accessed through the Company’s profile on SEDAR at www.sedar.com. 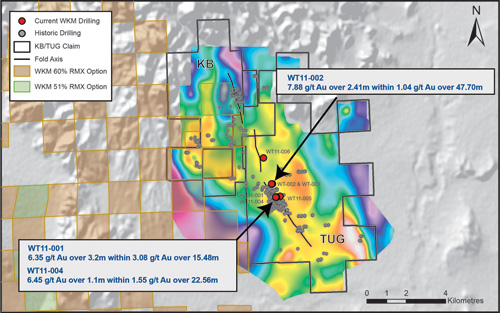 designed and powered by blender media